How to edit the contents of a git commit

When you type change git commit or similar keywords in a search engine, you find many answers explaning how to rewrite a commit message, but not how to actually modify the contents of the commit.

Lets begin by listing our commits:

In this screenshot I use my gl alias which expands to:

Here I want to modify the contents of the third commit, feat: Refactor and add features, because I mistakenly committed modifications to the changelog which I didn't want.

So I run an interactive git rebase down to this commit by running:

This command launches your git editor (vim here) to tell git what to do. Here we tell git to stop right after the commit we want to modify: 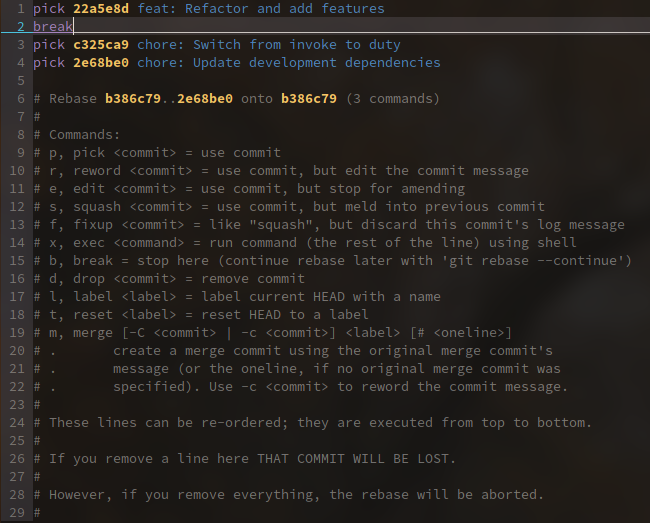 We save and quit this temporary file (with :wq), and git tells us that it stopped at the desired commit:

Don't pay attention to the commit SHA: I took the screenshot afterwards so they don't match

Now you can start modifying, adding or deleting files!

In my case I wanted to remove wrong sections in CHANGELOG.md, as well as remove conflict-resolution lines in pyproject.toml.

In this screenshot I use my gs alias which expands to git status -sb.

All you have to do now is to amend the current commit (the one at which we stopped, the one we wanted to modify):