While I was writing tests for one of my latest project, aria2p, I noticed that some tests that were passing on my local machine were now failing on the GitLab CI runner.

I decided I needed to write all exceptions to log files so I could inspect what happened on GitLab.

Since these tests were for the interactive interface of aria2p, using asciimatics and therefore an alternate buffer, I could not add print statements in the code to generate useful debug information that would be printed in the GitLab job logs.

But I was already logging every exception! I just had to enable the logging functionality while running tests, and write them to the disk so I could create an artifact! The artifact could then be downloaded, and inspected in great details to see exactly what happened.

Let say you have an interactive function that accepts user input and execute code according to this input. Anything could happen, right? So you log every exception that might happen like this:

Now in pytest, you would write a test function:

This code is not really important. What we're interested in is how we will write the logs of each test function into its own file on the disk.

Writing logs for each test¤

pytest allows you to run code before each test using fixtures. It's a bit more powerful than that (check the docs), but this is how we use it in this post.

In your tests/ directory, add a conftest.py file that pytest will automatically use.

Let's explain this code in details.

With this tests structure:

You will have this logs tree:

OK great! Now let's configure GitLab CI to use this directory as an artifact.

You'll typically want to download the logs when a job failed.

Add this in your test job:

Now when a job fails, you'll be able to download or browse the logs: 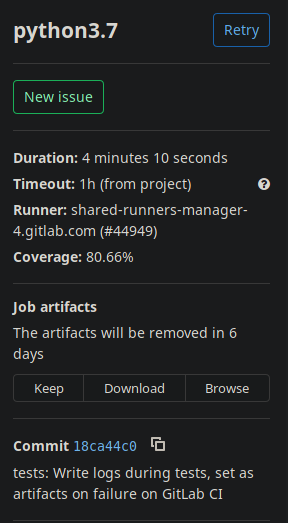 Or even from the pipelines pages:

Same thing, but for a GitHub workflow:

You'll be able to download the artifacts from the workflow page: 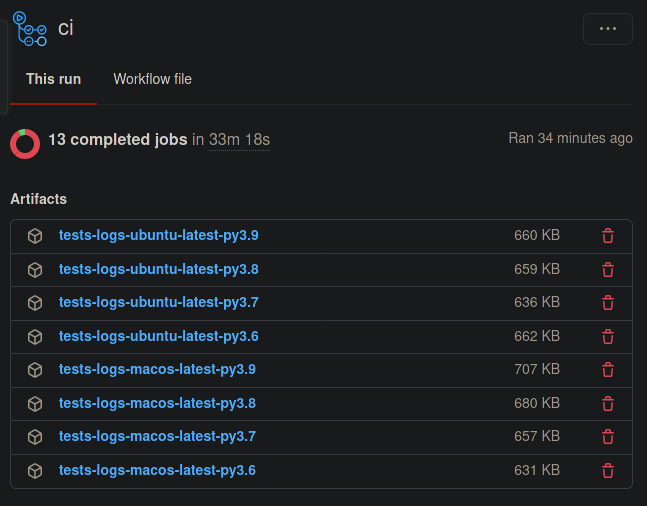