Published May 31, 2017 by Timothée Mazzucotelli

Python static code analysis is often used in Continuous Integration. I use it in every Python or Django package I develop, into a Tox configuration. The difficult part is to choose the right tools, because there are many, and to configure them correctly.

Thankfully, there also are tools using other tools to reduce the amount of configuration we have to do. This ends up in a big mix of tools, which is represented in the following chart. 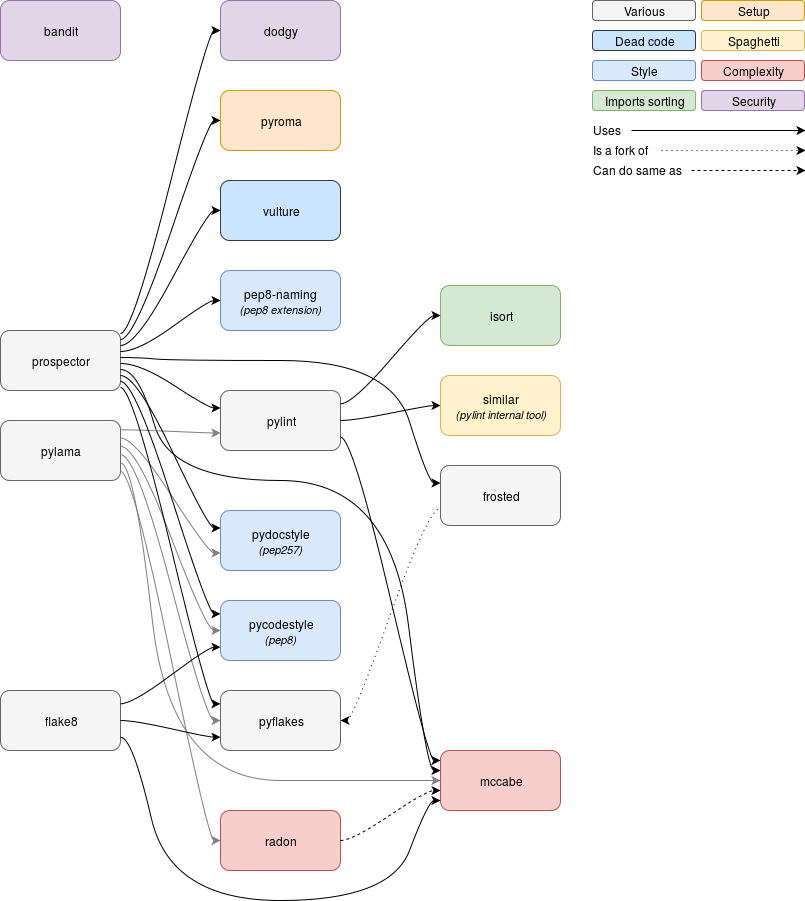 In this post, we will see the advantages and disadvantages of these tools, and compare them a bit.

Some tools have a unique purpose, while others aim at doing more. This is the case of Prospector, Pylama, Pylint and Flake8.

What is funny here is that both Prospector and Pylama use not only tools used by Pylint, but Pylint as well! There is a bit of overlap here.

What I like in Pylint is its ability to rate your code, and keep a record of its evolution, telling you if it has improved or regressed between each run. I also love it's Similar tool, a one of its kind, used to output the similarities in your code. You can run it with python -m pylint.checkers.similar FILES. It's very fast, but will start to take some time with a lot of files.

Pylama seems not to have much activity since last year and has unresolved issues and open pull requests. At the time of writing, it's Pydocstyle integration is broken. I also tried using it from Python because I wanted to count the number of issues in some code, and was unsuccessful to do so. Still, I used Pylama for some time because I liked a lot how it can be configured, directly in setup.cfg. Its options are simple to use and simple to configure. I find ignoring warnings in Pylama much more easier than in Prospector, as they are all ignored on the same line, and are consistent between them (only names composed of a letter and a code). Pylama can also be deactivated in specific locations of your code with comments like # pylama:ignore=D105,D106, and recognizes # noqa comments.

Prospector is my favorite here: I used it for quite some time before switching to Pylama, and I'm back with it now. I was afraid that it was deperishing, because maintainers did not seem to answer pull requests and fix broken integration, but many fixes have been pushed now. I think it's a great project and it deserves more activity!

What I like about Prospector is that it uses many tools to check many things, and it does it well: as I said earlier, there is some overlap between tools; Prospector handles that by keeping a record of similar warnings and only keep one of each to avoid redundancy in its reports! This is not done by default in Pylama, so you have to manually ignore redundant warnings in its configuration.

Prospector also helped me discover tools I never heard of before, like Dodgy, Vulture, Pyroma and Frosted. I would like to see integrations for Radon (used by Pylama) as it offers the same thing as McCabe plus other stuff, as well as for Bandit which is a Python code security checker.

What I miss in Prospector is the ability to configure it directly in setup.cfg, which I enjoyed a lot with Pylama.

I don't have much to say about Flake8 here. I did try it some time ago, but since Prospector does what it does, I won't use it. But it's only my personal choice and it can be a really good choice for others if they don't need to run all the possible code analysis tools in the world (unlike me :D).

Meanwhile, please share your thoughts! Did I say something wrong? Did I forget great tools? Did I write "tools" to much? I will gladly update the post with your sharings!

Go check Safety from PyUp.io, which check your requirements (dependencies) for known-vulnerabilities! Also Pyt for which I didn't take enough time to understand what it does and how it works, and great Code Quality web-services like Landscape.io and Codacy!